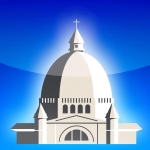 Both are named Bernard. One is a Dominican, the other a member of the Clerics of Saint Viator. These two priests work together on the mission of welcome and compassion at Saint Joseph’s Oratory of Mount Royal along with the Congregation of Holy Cross. Father Bernard East, OP, and Father Bernard Paquette, CSV, came to support the sanctuary’s pastoral team, particularly for sacramental confession and listening and providing spiritual guidance to pilgrims.

Another thing the priests have in common is that they have both travelled the world. Through his religious vocation as a Cleric of Saint Viator, Bernard Paquette was a long-time missionary in Peru and Chile. He also lived in Guatemala, Mexico, Brazil and the United States. “Now, even here in Montréal, people need the experiences I acquired in these different countries,” says Father Paquette, who speaks French, Spanish, English and a few words of Portuguese. Though he was an assistant to the Master of the Order of Friars Preacher, Bernard East has travelled to numerous countries. He also lived in Cameroon for a time. “My experiences speaking certain languages and particularly living with different cultures have prepared me to welcome people at the Oratory who come from diverse backgrounds,” he says. “Knowing a bit about the culture of the people you are speaking with adds depth to an encounter.”

In the spirit of the founders

Pilgrims have many spiritual needs. “Requests for attention, mercy and guidance give meaning to my vocation as a priest in Quebec,” explains Father Paquette. This collaborative effort within the mission of the Congregation of Holy Cross is in line with the beginnings of the two religious communities in Quebec. Bernard Paquette points out that this apostolate is “in line with Father Basile Moreau, founder of the Congregation of Holy Cross, and Father Louis Querbes, founder of the Clerics of Saint Viator, who both sent French religious to Montréal, in 1847, at the invitation of Bishop Bourget, travelling aboard the same ship.”

Bernard East knew little of Saint Joseph’s Oratory before beginning his pastoral work here four years ago. Drawing on an eight-century-old tradition of the Order of Friars Preacher, he will participate in the preaching of the Novena to Saint Joseph on March 10, 11 and 12. On a day-to-day basis, it is primarily through giving his attention that he gets closer to people, through the sacrament of Reconciliation. “Since I’ve been a priest, I’ve always reserved a significant portion of my time to make myself available to receive penitents,” he says, “as well as those requesting spiritual guidance.”

Serving the mercy of God

“How grateful people are for the priest’s presence in the Oratory’s services, morning to evening, every day of the year!” says Bernard Paquette, remarking the great thirst for mercy among pilgrims and happy to be available to listen to them. The work begun by Brother André is well served by the two Bernards and the pilgrims are well received. “Saint Brother André healed, but always in connection with the faith of those who came to him. He had trust in God’s goodness and infinite mercy,” says Bernard East. “Who doesn’t need the goodness of the Lord and his great mercy?”