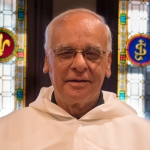 A Heritage in the Face of Disbelief

Such a contrast the Book of Wisdom presents us today in the liturgy. On one hand, see the unbelievers, proclaiming high and mighty that there is nothing after death. “We were born just by chance. Afterwards, it will be as though we had never existed.” Then, facing them, the just, believers who cannot affirm such a notion. And thus the unbelievers go: “Let us lure the just into a trap, because they affront us; they repudiate our ideas; their very presence weighs down upon us.”

In the passage from the Gospel according to John where they try to arrest Jesus, he, without presuming the title, can be seen as a just man, whose entire life and mission were defined as a service of “the One who sent me.”

“He was a just man.” Again that term. For the evangelist Matthew, that is enough to define who Joseph is. When, in a dream, this quiet man seemed to hear, “Do not fear to accept Mary and take good care of the one she will bring into the world,” he then demonstrated what he understood it to mean. A just man (somebody like Jesus) (somebody like the believer from the Book of Wisdom) who is able to conform his life to God’s will. Unbelief turned on its head.

Blessed are you, Lord our God, for you have raised up from among your people believers like Joseph — receptive enough to put their confidence in you without understanding everything at once; agreeable enough to surrender their plans for the future so that you might realize yours; adventuresome enough to allow for an unforeseen turn in their life, freeing themselves to accomplish what you have envisioned.