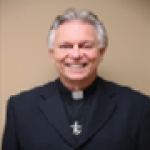 However, there is another title that can be appropriately given to Saint Joseph.

I have come to understand this while ministering in the blessings office.

Some pilgrims come to have their cars or other vehicles blessed. Usually they present their car keys which represent their vehicle. I respond with a prayer of blessing for the car, and especially for the people who will be driving it. I realized that Saint Joseph could easily be called the protector of drivers or the protector of travelers since Saint Joseph traveled a lot.

We know for sure that he traveled from Nazareth to Bethlehem while Mary was pregnant with Jesus and that he probably returned to their home in Nazareth. When the child Jesus’ life was threatened by Herod, he fled with Mary and the child Jesus as refugees to Egypt, then returned to Nazareth when Herod died.

As evidenced by his presence with Mary at the presentation of the child Jesus in the temple, he also went to Jerusalem. As a father, he was obedient to the Torah and the laws and customs of Israel. He would take the family to Jerusalem for the annual Passover celebration. On one of these occasions, as they returned to Nazareth, the 12-year-old Jesus stayed in Jerusalem.

Joseph and Mary had to return to the temple where they found Jesus listening to and teaching the priests and elders. As a carpenter, Joseph performed many aspects of the trade, which probably required him to travel, sometimes with his young son Jesus, to some of the villages on the western shore of the Sea of Galilee for supplies and projects.

It seems to me, therefore, that in the face of the difficulties of traveling mainly on foot, Saint Joseph can be invoked as the patron saint of travelers and pilgrims. Since he traveled sometimes with adequate preparation, but sometimes in a hurry, with joyful anticipation of celebrations and often with cautious apprehension of risky routes, with minimal human understanding of the results, but trust in providential guidance, he is an appropriate patron for us who travel.

Above all, he had extraordinary traveling companions, Jesus and Mary. It is because of this way of imagining Saint Joseph’s travels that I include references to his travels in my prayer for blessing automobiles and ask for his intercession to guide, direct, support and protect us, always accompanied by careful and defensive driving on the part of those who will use their vehicles.