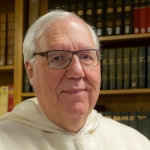 Day 7 of the Novena

Lazarus… the rich man… and a reversal of fortunes. The one who used to be a beggar enters into the joy of the Kingdom. The one who enjoyed life’s comforts can’t even get a drop of water to cool his tongue.

Alfred Bessette, poor fellow, left his homeland to join thousands of his countrymen who sought out work in the factories of New England. By the time he returned, he was still a poor man amid other poor. As a religious, he would stand next to the door his whole life.

He so invested himself with poverty that he became one of those “poor in spirit” to whom the Kingdom belongs. Poverty did not turn him in on himself. Rather, he became alert to misery, intuited it, embraced it. A poor man himself, he brought hope and, to many, healing. He is in fact the cause of this magnificent basilica. Through him, “the Almighty has worked wonders” (Luke 1: 49).

The rich man, entrapped by possessing and consuming, is unaware of anything else. He engenders nothing for others. He never lifts his eyes to heaven, because he is blinded by his goods, and constantly sets himself to getting more and more things without noticing the poor wretch on his doorstep. The centre of his life is himself.

Doesn’t one have to be poor in spirit to be a neighbor? To love? To share?

Saint Joseph, whose son was born in a manger, you had to work hard all your life to supply the needs of the Holy Family. May our hearts be poor in spirit, like yours and like Brother André’s, ready to see, to love, and to share.